Civilised humanity must take a stand in defence of freedom of expression, against Islamists and racists

Yanar Mohammed in the World Social Forum in Venzeuella 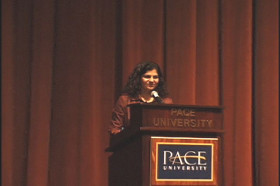 Caracas, January 25, 2006 – Sixth World Social Forum: Today, the activity organized by the Marcosur Feminist Articulation (AFM) entitled “From victims to resisting people. Your mouth is fundamental against fundamentalisms” was carried out before some 50 people – most of them women – who managed to overcome the vagueness of information within the Sixth World Social Forum programme of activities and finally arrived at the Colegio Universitario de Caracas. The workshop is part of the campaign launched by this feminist network at the second edition of the WSF in 2002, under the above-mentioned slogan: “Your mouth is fundamental against fundamentalisms”.Following an initial presentation by Peruvian sociologist and activist Virginia “Gina” Vargas – one of AFM’s coordinators and member of the World Social Forum (WSF) International Council – the central part of the activity was developed by Iraqi Yanar Mohammed. Notwithstanding the fact that this was her first participation in a WSF, and being still little known in the Western activist scene, Mohammed showed a surprising clarity of concepts and contagious energy when narrating the dual struggle faced by members of the Organization of Women’s Freedom in Iraq (OWFI) , which she chairs: against the Islamic fundamentalism and Arab nationalism that oppresses women, and against the US military occupation that has maintained the country under US rule for almost three years. Mohammed’s commitment and convictions, which earned her both death threats in her country and the recognition of international media – which named her as one of the world’s ten most outstanding women activists in 2005 – were rewarded with the touching comments and contributions made by the public and the warm final applause that closed the workshop.

In her presentation, Vargas aimed at specifying the point of the campaign “Your mouth is fundamental against fundamentalisms” within the framework of the WSF process (the campaign, by the way, added colour to the initial march with thousands of mouths distributed among the crowd). According to the Peruvian activist, the campaign is consubstantial with the new WSF policy approach. Vargas highlighted that the opposition to any sort of fundamentalism aims to summarize the rejection of all kind of “unique thinking”, being either of economic, racial or gender nature. “The rejection of fundamentalisms – she pointed out – allows for the articulation of opposition both to market fundamentalism, whose religion is neo-liberalism, as well as to the gender fundamentalism that oppresses women”. In this sense, the Marcosur Feminist Articulation has been working at the WSF International Council in favour of the incorporation of said rejection to all fundamentalisms as one of the WSF principles.

The new internationalism that has sprung up in recent years within the heart of the global alternative movement could not possibly do without the experience of decades of international coordination of women’s movements. As Vargas pointed out, the Marcosur Feminist Articulation has aimed at creating spaces for dialogue and common struggle among realities that in spite of being different share key aspects within the framework of an alternative to capital globalization as proposed by the global civil society. This has been the point of the Feminist Dialogues promoted by the Marcosur Feminist Articulation since 2004 at the WSF in India with the participation of 180 women from all over the world.

Iraqi women: “our mouths, our voice”

All of the above was used by Vargas to introduce Yanar Mohammed, invited by AFM to Caracas. The Iraqi activist came to the WSF to give her testimony about the fruitful possible exchange among feminists worldwide and also to contribute with one of the purposes of the campaign against fundamentalisms: that is, not to exclusively link them to the Islamic area.

Mohammed started her presentation by praising the campaign slogan: “our mouths and our voices”, she stated, “have been the ones that first started to open a path among the Iraqi society”. As it was related by this 45 year-old woman architect who lived seven years in Canada, in August 2003 she grabbed the microphone at a spontaneous demonstration of women against the occupation of Iraq and by yelling “yes to women, yes to equality” she was rapidly joined by many other women.

That was the initial kick-off of her organization. Being initially made up of only three women, nowadays the Organization of Women’s Freedom gathers about 5,000 women. OWFI helps tens of thousands of women who have been left unemployed after the war and US occupation. Besides, it struggles against “honour killings”, an institution of the old Islamic tribal tradition that grants men the possibility of taking the life of their wives if they are believed to have betrayed marriage.

Mohammed showed interest in providing the audience with a non-reductionist image of Iraqi women. In the first place, she did so by means of her own history. As it was told, in the 1940s and 1950s Iraq used to be a country where women managed to achieve economic and cultural progress and had access to modern forms of life, mainly thanks to left-wing parties (the Communist and Socialist parties). However, in recent decades and particularly thanks to the contribution of the US occupation to that effect, women have suffered a significant involution.

In the second place, however, Mohammed showed through photographs how the image of veiled women is far from being the only one to be found in present-day Iraq. In an optimistic tone, she made it quite clear that day after day new women are joining a struggle she framed within three goals: the end of foreign occupation, the repeal of the Islamic constitution and its replacement with a secular one, and finally, the necessary economic and social equality among men and women. In that sense and with a certain spark of humour, Mohammed requested permission from the audience to go on defining herself as a socialist besides being a feminist.

Mohammed found empathy with the public – for example, with a young Colombian woman who felt herself identified with the Iraqi activist when she graphically defined the situation of civil society and Iraqi women as that of a “sandwich”: between the US occupation and the nationalism of the Islamic resistance. Both forces, she pointed out without any kind of consideration, are equally terrorist since they have promoted the systematic violation of human rights. For example, although not exclusively, through the kidnapping and sex traffic in women, which has dramatically increased with the chaos brought about by war.

Mohammed managed to distil affection and strong convictions all throughout her talk. These were expressed by means of her confidence in the new projects of the organization, such as the creation of a satellite television channel aimed at disseminating women’s reality, which has been silenced by large media emporiums, or more generally, by mentioning her goal of “revolutionizing the life of women” and promoting a wave of feminism in her country.

Once the activity came to an end, Choike talked to Gina Vargas, who was rejoiced over the workshop’s success.

Choike: Four years after the campaign launching of “Your mouth is fundamental against fundamentalisms”, what balance can be made?

V. Vargas: The campaign should be understood just like the Forum: as a process. But it is undoubtedly a cumulative process in which we have done very important things. I think that the campaign has succeeded in incorporating what I call opaque inequalities into the agenda under discussion: from forms of gender violence considered to be natural to sexual rights. Besides, every day that passes by more “crazy” women decide to join the campaign. For example, the theatre group from Northeast Brazil, “Locas das Pedras Lilas” which is here in Caracas and has been very important to give visibility to the campaign.

Where does the concept of “fundamentalism” spring up from and how is it incorporated into the feminist struggle tradition?

The idea was originated within the context of Mr. Bush’s warlike fundamentalism. We wanted to put off-centre the imaginary that necessary refers this concept to the Islamic East. Moreover, this is a useful concept for us since it is a universal notion capable of encompassing different dimensions of the fight for justice in all spheres of human life.

Being a member of the International Council and someone who has participated in the WSF process from the beginning, what is your early evaluation of the Sixth WSF in Caracas?

Although the WSF is already beginning and it is worth highlighting the effort made by organizers and volunteers in these last days, there is a trend I am concerned about: that of giving a unilateral character to the WSF process in an anti-imperialist hegemonic sense, which by giving priority to one dimension of the struggle might be threatening diversity, a constitutive element of the WSF from its early beginning. In this sense, I do not agree with some people of the WSF, like Emir Sader, who are calling for the recovery of the Bandung Conference spirit (landmark event of the Third World movement). Today we are living a different time. This trend, somewhat evidenced in the possibility of there being a President talking non-stop for several hours and capturing everybody’s attention, implies the danger of losing the richest thing within this five-year wonderful process: being a space of tremendous wealth for people and civil society networks from all over the world .

Permanent link to this article: https://www.owfi.info/article/yanar-mohammed-in-the-world-social-forum-in-venzeuella/