AskYanar: Your Chance to Connect with an Iraqi Women’s Rights Activist

Who will condemn the sexual enslavement of Iraq’s minority women?

Slavery and rape are being used as weapons of war by Isis against Yazidi and Christian women, yet rights activists are silent Evidence that women belonging to the Yazidi and Christian religious minorities in Iraq are being raped and sold into slavery by the Islamic State (Isis) is mounting. One of the first to speak out was Vian Dakheel, the only Yazidi female MP who addressed the Iraqi parliament last week, despite the speaker telling her to be quiet and stick to the agreed statement. 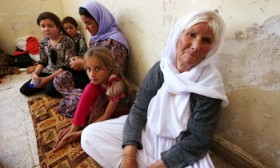 An Iraqi Yazidi family that fled the violence in Sinjar take shelter at a school in the Kurdish city of Dohuk. Photograph: Safin Hamed/AFP/Getty Images

“Mr Speaker, our women are being taken as slaves and being sold in the slave market,” she said.

A spokesman for Iraq’s human rights ministry, Kamil Amin, confirmed that the Islamist group had captured Yazidi women under 35 years old, that it is holding them in schools and likely to use them as slaves.

The news was reaffirmed by the Iraqi Red Crescent and the international press, which reported that those fleeing had received phone calls from their daughters, wives or sisters saying they were being taken as brides or warned to convert or die. The issues has also been documented by US state department and the UN.

The intention of highlighting the plight of minority women is not to obscure the broader suffering of religious minorities in Iraq, which according to UN officials amounts to genocide. Nor is it to ignore the predicament of many Iraqi women who have suffered the worst backlash against their rights since the Islamist authoritarian regime of Nouri al-Maliki took power, and, more recently, in Isis-controlled areas.

Rather, it is to press for acknowledgement of the ways in which gender, religion and location intersect to produce a situation in which women belonging to minority religions are being targeted.

As Isis has taken over cities with large religious minority populations in Nineveh and Mosul, they have targeted women belonging to those minorities.

The Organisation of Women’s Freedom in Iraq has decried the abduction of women and their rape under the Isis banner of jihad al-nikah (sex for the pursuit of struggle).

But there has been a deafening silence among other feminists worldwide, including those in Arab countries. Since the bombing began in Gaza, I have received an impressive stream of petitions, requests for solidarity, and for contributions to campaigns to help women there, and I applaud all these efforts. I have not received a single plea from any women’s rights groups calling for solidarity with the Yazidi and Christian women whose communities are facing a genocide.

The negation of the experiences of women belonging to these religious minorities is partly a consequence of the limited information on the scope and intensity of Isis assaults, and partly one of ignorance. The term “Arab world” is used almost synonymously with “Muslim world” when considering gender justice, which means there is an assumption that all women are Muslim; the diverse voices of women belonging to religious minorities are absent.

When it comes to rights in Arab countries, whichever advocacy “camp” one is talking about – campaigners for religious freedoms, minority rights or women’s rights – minority women’s voices are not there.

For example, while the UN’s Economic Commission for Latin America and the Caribbean has produced a report on how the intersection of gender and indigenous identity created inequalities in access to resources, the UN Economic and Social Commission for western Asia (which covers the Middle East) has yet to render special recognition for women of religious minorities in the region.

Women’s rights activists now need to take a proactive stance. They must speak out against the killing of religious minorities, supporting local women’s efforts to record all the evidence that is critical for proving accountability thereafter. They must also mobilise resources for humanitarian aid, press governments to give them refugee status and help local women narrate their experiences. Finally, they must mobilise transnational feminist movements to use all international instruments (such as UN resolution 1820 on sexual violence against women) to name and shame perpetrators.

This kind of action can make a difference. As a consequence of intensive lobbying for international recognition by indigenous women and their supporters, a resolution was passed in 2005 (pdf) at the Commission on the Status of Women, highlighting their rights and needs, which was considered “a tremendous achievement for indigenous women”.

Certainly, it takes more than a UN resolution to redress inequities and injustices but it is a first step towards recognition. For women belonging to religious minorities in the Middle East, the term “indigenous” does not sit comfortably (neither does the term minority for that matter, in view of its colonialist overtones). However, many would endorse the recognition of how the intersection of gender, religion and location has influenced their lives in critical ways. It won’t change the disastrous situation on the ground for now, but it is better than being silent.

Permanent link to this article: https://www.owfi.info/article/who-will-condemn-the-sexual-enslavement-of-iraqs-minority-women/