Noor (not her real name), a 14-year-old girl from a small village in northern Iraq, was sold 15 times, passed from one Islamic State (Isis) fighter to the next. Each time, she was raped. Noor managed to escape and made her way, mostly on foot, to a refugee camp. There, she met Yanar Mohammed, an Iraqi women’s rights activist, who told me Noor’s story. “The worst moments,” Noor said, “were when one man would sell me to another. And I would have to hear them debating what my life was worth.”

I heard many more stories like Noor’s at a recent gathering of Iraqi and Syrian women’s rights activists in Istanbul. Some of the women had never met before, but they shared a common purpose: to end the scourge of rape unleashed on them by civil war and the ascent of Isis.

But how to do that? No soldier in a war will hold on to a weapon that does not work. So what will it take to disarm rape as a weapon of war? 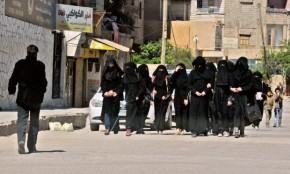 A glimmer of an answer shone through the women’s harrowing stories. Activists from Syria and Iraq spoke of a subtle but critical shift in their communities to end the stigma surrounding sexual violence.

As recounted by the women in Istanbul, Isis has used rape to exert control and spread terror through communities. It has imposed draconian limits on women’s freedoms to work, speak or be seen in public, policing these controls through violence. Isis has abducted women and girls, sometimes by the busload, and sold them into sexual slavery.

Ordeals like Noor’s are neither random nor rare. Rape is useful for Isis: it traumatises individuals and undermines their sense of autonomy, control and safety. It triggers mass displacement when word reaches people.

But the most destructive power of rape as a weapon of war lies in the deep-rooted stigma attached to it. Survivors are ostracised, even blamed for the attacks. Families fear being tarnished by the stigma and banish wives, mothers and daughters. In the worst cases, people adhere to distorted notions of “honour” and kill rape survivors. In short, rape tears at the fabric that binds families and communities.

But something different is starting to happen in some of the Isis-controlled zones of Iraq and Syria. There, the sheer number of women who have suffered sexual violence seems to be creating a potential tipping point. The women I met, both Syrian and Iraqi, reported that with rape occurring on such a huge scale, some families are choosing not to reject their mothers and daughters returning from captivity by Isis. As Mohammed said: “It’s harder to blame a woman for having been raped when it’s happening to so many.”

We saw this change in Rwanda, where rape was a systematic weapon of genocide. Afterwards, the critical mass of survivors triggered a new national conversation on sexual violence, on the morality of ostracising survivors and on women’s human rights more broadly.

A similar shift may be possible now. If Iraqi and Syrian women’s rights advocates can uproot the community response that stigmatises and isolates rape survivors, the utility of rape as a weapon of war is diminished. It will not work to unravel communities. The strategic opening could be transformational for women and for warfare – but only if women from within affected communities can act now, while deeply rooted social norms around rape are in flux.

Grassroots activists in Iraq and Syria are already mobilised, reaching out to survivors and their families with aid and counselling. Some have set up emergency escape routes to activist-run shelters. Many regularly visit refugee camps, not only to bring relief supplies but to listen to women’s stories carefully and without judgment.

One woman whom Mohammed met in a refugee camp said that the first time she was raped, she asked herself whether she would survive to tell anyone about it. Speaking to Mohammed gave her hope, she said.

Activists like Mohammed have begun to change the conversation; in Istanbul, they referred to alliances forged with other activists and local officials, including prominent men. One Iraqi activist spoke of a local authority figure who has become an ally. At great personal risk, he condemned honour killing at a gathering of tribal heads. His brave act of solidarity opened a community dialogue in support of women’s rights.

All these are vital interventions, modelling a way for communities to stand by survivors and begin to render rape obsolete as a weapon of war.

As Mohammed said: “We want Noor’s community to see her not as a ruined, raped girl, but as a prisoner of war who was strong enough to survive weeks of torture and brave enough to escape.”

Permanent link to this article: https://www.owfi.info/article/what-will-it-take-to-stop-isis-using-rape-as-a-weapon-of-war/