You’re Invited: “My Body Is Not Your Battlefield”

In a PBS NewsHour video report in June, Isis extremist militants parade through Mosul, Iraq, one of the first cities to fall to their onslaught in early June. The armed men are hanging off the back of trucks, as the crowd films them. One fighter leans out a car window, wagging his finger. The footage provides a translation. The fighter has spotted a woman, and he is ordering her to cover up. 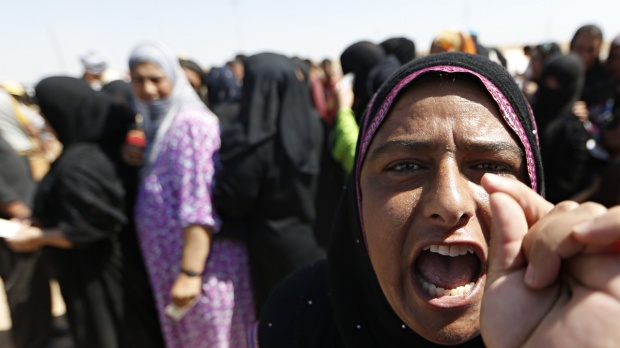 This is how an extremist agenda is imposed: on women’s bodies. That fighter had barely arrived in Mosul yet his first order of business gives us a chilling glimpse of a broader strategy, one that targets women with repression and violence. In recent weeks, women living under Isis control have been seized from their homes and raped. They have been ordered to cover themselves fully and stay in the house.

As Iraq descends into war, women are not only on the frontlines: they are the battlefield. But here is the part that too many media reports have missed: they are not just victims; they are critical first responders.

To understand this, we need to rewind to the worst days of the sectarian violence that erupted under the US occupation. In those bloody years, the US dismantled Iraq’s secular government bureaucracy. It imposed a system that allocates political power according to religious sect, turning a theological difference into a dangerous political divide.

The US also backed militias who enforced that divide with brutality and used US money, training and weapons to impose their own fundamentalist agenda on the population. Under US rule, sectarian militias launched a campaign of terror, hunting down activists, artists, academics and anyone who challenged their vision of society. Women were targeted specifically. In 2008, graffiti on the walls in the city of Basra threatened, “Your makeup and your decision to forgo the headscarf will bring you death.”

Women were not even safe at home, especially after the clerics of US-empowered political parties endorsed “honour killing” as a religious duty for families to police women’s behaviour.

In response, Iraqi women mobilised in unprecedented ways. For instance, the Organisation of Women’s Freedom in Iraq (Owfi), a partner organisation of Madre, created a network of underground safe houses for women fleeing violence at home and in the streets. Under conditions of military occupation, civil war and fundamentalist witch-hunts, the women of Owfi spoke out against policies that created sectarian divisions and fuelled gender-based violence.

Fast forward to today, and Iraqi women are facing the new incarnation of an old nightmare. In Baghdad, sectarian violence is again on the rise. Iraq’s prime minister, Nouri al-Maliki, is fanning those flames by rejecting calls for unity and resurrecting the militias that only a few years ago turned public hospitals into torture chambers and raped women who stepped out of line.

As men leave to fight, tens of thousands of women are becoming heads-of-households, responsible for meeting the urgent needs of their vulnerable families and communities. Meanwhile, in communities occupied by Isis, fighters have kidnapped women from their homes, telling their families that these attacks are justified by a “sexual jihad”. Four women committed suicide after militants raped them.

This violence is not random. Rape is a terrifyingly common weapon used to terrorise and control communities during warfare. Yet, only recently has the topic been treated with the seriousness it warrants. On the day that Isis conquered Mosul, world leaders were in London for a summit to address the scourge of war-time rape. Now, governments’ commitment to protecting women in war zones from sexual violence is again being tested.

World leaders have a vital source to turn to for solutions to this crisis: Iraqi women themselves. In cities across Iraq, Owfi, with Madre and other international allies, is rallying resources to provide shelter, medical care and humanitarian aid to women who have survived rape or have been forced to flee Isis-controlled areas. Owfi is providing food aid to women who are heads of households, who can then reach the most vulnerable displaced people, including children and the elderly.

Even in Anbar Province, where Isis flags are flying high, Owfi is there, offering protection and aid to those who are most at risk of sexual violence. These are the women who never stopped organising through the years of invasion, occupation and civil war. Once again, they are facing down brutality.

Permanent link to this article: https://www.owfi.info/article/under-isis-iraqi-women-again-face-an-old-nightmare-violence-and-repression/