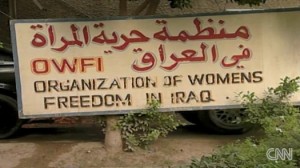 Dear Occupy Wall Street, The people of the world are watching you, following your news and hoping that – rather than just vent your anger and frustration – you achieve all of your dreams. While democracy should guarantee all people an equal say in the decisions that affect their lives, you find yourselves forced to take to the streets, as politicians and bankers make decisions behind closed doors and hire an army of police to send you back home with nothing.

While a wealthy 1% ravages your jobs, health, and very lives, their focus is always on their banks and not on the welfare and future of innocent, unsuspecting millions of people. In times of growth, those banks are sustained by your labor, resulting in extravagant luxuries for the 1%; while their economic failures and crises deny you basic resources and economic rights.

This is the same 1% that pursued the war on Iraq without hearing the millions who marched – in the United States and around the world – expressing their opposition. While claiming democracy, the 1% builds vast armies to be launched not just against people all over the world, but also within their own borders.

A second wave of global revolutions has begun as the 99% (that is, the global working class) rejects the tyranny, marginalization, and poverty which capitalist authoritarian governments force onto billions of us. Despite all claims of representation, capitalist states make the people pay the price of the economic failures of their political systems with unemployment and government cuts, while the banks get bailed out by the same resources that people’s toil has created. Avoiding the poverty and starvation of billions is never the concern of these so-called democracies as much as the stability of their own political rule. Moreover, that same 1% re-creates the same failing model of “democratic” capitalist political structures in newly-invaded countries around the globe.

The so-called democracy of Iraq, created by the western capitalist states, divides Iraqi oil reserves between the 1% politicians and a massive, newly-built army, which is now well trained to crush the Iraq’s Tahrir square demonstrations (active since Feb 25th), with live ammunition, torture, and beatings. While the 99% of Iraqis seethe with anger waiting for the right conditions to claim what is theirs, they eagerly follow your progress in occupying Wall Street, as our enemy is one whether they are American or Iraqi. That enemy is the 1% of ruthless exploiters.

Although plans of US withdrawal from Iraq have been publicized worldwide, we are certain that US bases will remain around our cities and villages in one form or another, fully ready to attack and crush any popular uprising, whenever deemed necessary. Although the US administration has already installed Iraqis to maintain systems of inequality and suppression in Iraq, they will continue to keep their military arsenals on full guard for a worst case scenario. This is what our newly-installed democracy grants us: poverty, inequality, suppression of dissent, and a lack of civil liberties for the vast majority of the people, especially women.

People of the world have come to refuse a culture of wars and also the “democracy” of the rich. It is time for a political system of equal wealth for all, in other words, a socialist system, where free market rules cannot starve billions while filling the pockets of a few. Connecting such a movement globally was beyond even the wildest dreams of most visionaries, but has proven to be within reach in 2011. And your #Occupy movement has played a leading role in igniting it.

While hunger and wars are planned and organized by a ruthless 1%, it is the responsibility of the 99% to create a better world, built on values of humanity, equality and prosperity for all. In this world, decision-making will not be taken by World Banks, capitalists, and their representative statesmen, but by the immediate representatives of the working class.

Putting demands to the 1% is not the solution, as they have failed repeatedly and can only proceed with their methods of starving working people and bringing on more economic failures.

The time has come for a second step. After occupying the street, it is time to break into the castles and palaces of the 1%, and claim what is rightfully yours, to start a new era based on global peace, equal division of wealth, and humanity.

We stand behind you and carry on our continuous resistance to the rule of the 1% in Iraq, Syria, Egypt, Tunisia, Yemen, and the entire world.

Permanent link to this article: https://www.owfi.info/article/message-of-solidarity-to-occupy-wall-street-from-the-organization-of-womens-freedom-in-iraq/