On the Occupation of Mosul and the Cities of Western Iraq 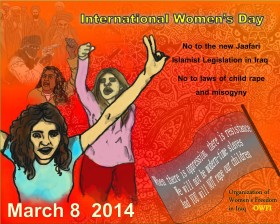 Male, Class, and Sectarian Oppression are Strengthened Through Exploiting and Subjugating Us

Eleven years of violence in Iraq have resulted in the escalation of a sectarian, authoritarian, backward, and oppressive rule; these years led to the creation of a dictatorial power that violently opposes any actions for liberation and egalitarian demands; an authoritarian dictatorship that is ready to commit all types of crimes and violations against human rights in order to preserve political power and position; a tyrannical command that kills whoever opposes it; an oppressive power that has produced a culture of sectarian violence, terrorism, and assassinations; a dishonest government that destroys the western parts of the country by bombing based on an imposed sectarian conflict.

The current Iraqi government has established a ruling class to whom extensive resources are allocated; meantime practicing economic oppression against the poor, who make up the majority of the population. Feminization of economic oppression is part of the Ja’afari Jurisprudence and personal status law, which incorporate articles that violate women and young girls’ rights by treating them as objects for men’s sexual pleasure. Ja’afari Jurisprudence guarantees women’s losing freedom of movement and property ownership. It deprives women of their marital alimony, if they are found to be not sexually appealing to their husbands. Ja’afari Jurisprudence deprives women of their economic rights and treats them as “objects” used for sexual entertainment and reproduction machines for males who maintain their rights and freedom in choosing either to acknowledge or deny that the child is their own offspring.

The MENA region has witnessed dramatic political changes and revolutions against authoritative political systems during the so-called “The Arab Spring,” to which women have effectively contributed and offered sacrifices in order to make these changes take place. However, the Islamic politicized powers, which hijacked the Arab Spring revolutions to gain their political powers — which became the counter-revolutionary governments in Egypt and Tunisia — have directly targeted women, not only by excluding them, but also by legalizing women’s enslavement through jurisprudence and constitution. The aftermath of the “revolutions” pushed women out of the public sphere and jeopardized their legal rights.

Simultaneously, in Syria, Yemen, and to some extent Libya, political Islam have imposed their own laws and cultures on women. In Syria, the situation has become disastrous: women are exploited to sexually entertain the male Mujahideen of Qa’eda and other terrorist groups, under a new jurisprudence called “Nikah Al Jihad” [Jihad’s intercourse], which is the worst type of a legalized rape committed by Islamic mobs and criminal gangsters against women.  Through these criminal acts, Islamic politicized powers have proved that they are actually anti-revolutions; more accurately, they are counter-revolutions, which wipe out the true revolutions of progressive powers in the MENA region.

In Iraq, the patriarchal ruling class has empowered some females so that can promote the implementation of the government’s oppressive policies, for example by electing a Minister of Women’s Affairs who is “Muhanka” [covered with a special hijab that covers her head and chin], thereby advocating her religious institution’s right to oppress women. Ironically, the female Iraqi Minister of Women’s Affairs is actually contributing to the oppression of women by representing the government’s misogynist policies. Unfortunately, some women’s organizations ally and compromise with this Minister of Women’s Affairs to implement some “reform projects,” which have ended up in producing a women’s movement that is not unified, for which every step forward results in two steps backward.

In the same manner, some female parliamentary members have become oppressive tools against their own kind.

OWFI firmly stands against all kinds of oppression and exploitation that are imposed by the authoritarian governing class, based on class analysis and a revolutionary vision for equality. We call upon all other women’s organizations not to submit to the misogynist vision of the ruling class thereby becoming oppressive tools and to focus their attention and efforts on building up a movement for women’s liberation, social justice, and the elimination of all types of oppression and exploitation.

Long live March 8, a symbol of struggles for women’s liberation!

Organization of Women’s Freedom in Iraq

Permanent link to this article: https://www.owfi.info/article/international-womens-day-statement/