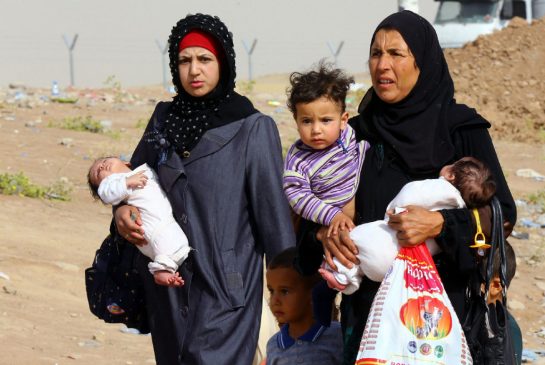 Among most traumatized are women and children, drawn into a new humanitarian crisis — the most severe in living memory for its swiftness and intensity.

When a savage Islamic insurgency hit Mosul like a sudden summer storm on June 10, the northern Iraqi town was caught unawares.

But within days, hundreds of thousands of people fled to safer Kurdish territory. Among the most traumatized were women and children, drawn into a new Middle East humanitarian crisis — the most severe in living memory for its swiftness and intensity.

“This is a crisis of epic proportions, and it’s completely unprecedented,” says Karl Schembri, the regional media manager for Save the Children’s Middle East office. Some 500,000 people have fled to Kurdistan this month, he said, in addition to about 500,000 Iraqis and Kurdish Syrian refugees who fled violence earlier in western Iraq.

On Wednesday the UN children’s agency UNICEF raised Iraq’s crisis level to three — the highest — adding that the country had already reached critical levels of polio cases and, with the Syrian humanitarian and refugee disaster, now had three consecutive crises at once. Funding for aid, meanwhile, continued to fall far below the levels of basic needs.

The refugee crisis began with an insurgency last December in western Iraq, and terror spread earlier this month as militants from the Islamic State of Iraq and the Levant (ISIL) took over northern towns from the retreating Iraqi army, including the major city of Mosul.

“Three days after the invasion began, the militants were knocking on doors asking for unmarried women,” said Yanar Mohammed, president of the Baghdad-based Organization of Women’s Freedom in Iraq.

“We were told that 13 were taken from their homes and raped. More were taken later. The militants said it was their duty to serve the needs of the jihadists. Nothing like this had ever happened in Mosul before.”

The plight of women has worsened, Mohammed said, because many men went into hiding or joined the army to fight the insurgents, leaving them to fend for themselves.

From Irbil, in autonomous Kurdistan, Schembri said that displaced people are arriving in “startling numbers,” in a state of shock and confusion.

“It is very hot now, and some people walked all the way from Mosul. They are displaced over a huge region so they are hard to track. In Irbil there are about 100,000, and in Dohuk 200,000. The numbers are massive and increasing.”

Struggling to keep up with the influx, the Kurdish authorities are stopping people at checkpoints along the regional border and have set up camps for the new arrivals outside Kurdistan.

Those who managed to enter have been hosted by generous — but often poor — Kurdish families, and in some cases friends or relatives.

“Some fled with just the clothes on their backs,” said Torontonian Sarah Case, a Jordan-based senior policy adviser to the International Rescue Committee.

“The government provided them with water at the border. The lucky ones found places to stay, others went to schools and mosques. Humanitarian agencies are setting up basic services in the camps. But we are concerned about their medical needs, because newly displaced people don’t have access to health care.”

The crisis is likely to deepen, Schembri said. “People who came with some money rented flats or hotel rooms, but now their money is running out. Hundreds are moving onto the streets and into public parks.

“We found families living with no showers and water that wasn’t drinkable. And those were the ones who were lucky and strong enough to leave their homes and come here.”

With temperatures higher than 40C in the Iraqi summer, conditions are especially risky for young children, he said.

For those attempting to flee the violence, fuel shortages in central Iraq could make travel more difficult and affect water stations and hospital operations during the hottest period of the year, warns a report from the IRC.

Permanent link to this article: https://www.owfi.info/article/in-iraq-humanitarian-crisis-called-epic/