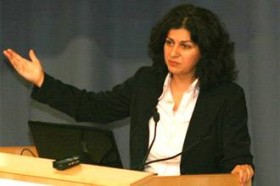 On a bullet-scarred side street in Baghdad’s downtown, where U.S. Marines famously helped tear down the statue of Saddam Hussein in April of 2003, an inconspicuous entryway tucked between a steel-shuttered shop and a rickety candy stall leads to a flight of steep concrete stairs. Rusted water pipes run precariously over and across the poorly lit top step, tripping first-time visitors. The second-floor landing bottlenecks into a dark, empty hallway. Women in black abayas hurry across the buckled floor tiles in silence and quickly disappear through an unmarked plywood door on the right.

The decrepit two-bedroom apartment behind this unassuming portal is an essential junction of what activists in Iraq and their U.S. supporters call the Underground Railroad. This Railroad is a small, clandestine network of several shelters, located mostly in Baghdad, for the countless but commonly overlooked victims of the war in Iraq: women who have been raped, battered or forced into prostitution, or women who, accused of bringing dishonor to their families by having been abused, have been rejected or even threatened with death by their relatives.

In a country ravaged by war and fractured along sectarian lines, these shelters serve women who have nowhere else to turn for help. Operated despite recurring threats and lack of government support by a team of 35 Iraqi activists who call themselves the Organization of Women’s Freedom in Iraq (OWFI), the shelters offer a glint of hope for civil society.

The Underground Railroad was founded in 2004 by Baghdad-born architect-turned-feminist-organizer Yanar Mohammed, head of OWFI, along with MADRE, an international women’s rights group based in New York. It provides the only sanctuaries for victims of sexual abuse and domestic violence outside the quasi-autonomous Kurdistan region in northern Iraq, where the local government and NGOs operate several similar shelters. In addition to providing temporary asylum, it helps women resettle in places where their abusers cannot find them easily. Since its inception, says MADRE Policy and Communications Director Yifat Susskind, the Railroad has helped thousands of women. Several have been transferred to Turkey, at least two now live in the U.S., but most of the rescued women have remained in Iraq.

Saddam Hussein’s regime persecuted political dissidents but allowed women personal rights and freedoms; assaults on women were rare. But when violence engulfed the country after the U.S. invasion, women became “the easiest targets,” says OWFI member Dalal Juma. Violence against women is rampant and goes virtually unchecked by Iraq’s new legal system, which is influenced by conservative clerics now dominating the country’s politics, and which follows tribal and Islamic Sharia law more closely than it ever had during Hussein’s harsh but secular rule.

Rape has always been a weapon of war. If rapists don’t murder their victims, the women’s own relatives might: The rise of radical Islam after the fall of Hussein’s dictatorial rule has helped resurrect reactionary values that stigmatize abuse of women and its victims. Although no statistics exist, Mohammed estimates that a third of rape survivors are killed by relatives who believe the women have disgraced their families.

Like rape, these so-called honor killings go virtually unpunished, reports Amnesty International. A typical sentence for such killings runs about six months, the judicial equivalent of wagging the finger. MADRE estimates that the Railroad has helped more than 300 women escape honor killings.

The cheap apartment is all the organization can afford; Mohammed tells me that it costs about $60,000 a year to operate a shelter this size. That includes rent, security, utilities, food and clothes for the women staying at the shelter. With the squalor comes anonymity, and the inherent promise that, at last, the women are safe. Shelter workers believe that the shelter’s inconspicuous nature protects them from religious militias, which, Amnesty International reports, routinely target women’s rights advocates. Mohammed has received death threats in her email; she carries a Glock pistol in her leather purse, although she admits she’s not a very good shot. The Railroad’s shelter locations are kept secret from angry husbands and male extended family members.

Samira (not her real name), a Sunni widow from the restive eastern province of Diyala, will stay at the shelter for several months, until it’s safe for her to move on. She arrives early in the mornings at OWFI’s downtown Baghdad headquarters, located behind a stucco fence fortified with coils of razor wire to ward off intruders, and doesn’t leave until after dark. Surprisingly, activists make no attempt to disguise that official location: In March, the white metal gate of the compound was adorned with two brightly colored posters depicting a woman screaming through prison bars, emblazoned with the words “Speak out and struggle for women’s freedom and equality.”

For now, Samira spends most of her evenings cleaning the shelter: her safe haven, and her chance for a future without abuse.

“If it weren’t for this shelter I would have become a prostitute,” Samira said. “Now I feel I have a family around me.”

For the full version of this article, pick up a copy of the Summer 2009 issue of Ms. on newsstands, or have a copy sent to your door by joining the Ms. community today!

ANNA BADKHEN has reported extensively from Iraq since 2003. She is writing a book about war and food. Her reporting trip to Baghdad this year was made possible by a grant from the Center for Investigative Reporting.

Permanent link to this article: https://www.owfi.info/article/baghdad-underground-a-railroad-of-sorts-helps-iraqi-women-escape-servitude-abuse-and-even-death/