Women of Iraq Left All Alone

The Day of Iraqi Rage 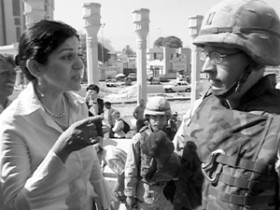 Iraq was subject to one of the longest and most violent wars of the last decades; one which killed more than a million civilians. Moreover, new method of political struggle developed during this war which is based on killing and terrorizing civilian individuals and groups such as what happened in the Lady of Salvation Church in Baghdad in this month, where the armed militias from Al Qaeda and armed state forces collaborated towards the killing of tens of innocent civilians in a house for worship

In spite of the claims of the state that terrorism is the responsibility of foreign groups, it became clear during the last stages of the formation of the government that acts of terrorism are connected to main participating groups in the government, which were ready to end innocent lives in order to claim a stronger presence in the political formula

After the occupation of Iraq by the most modern and deadly military arsenal in the world, it was no surprise that the society be dominated by the rule of jungle instead of the rule of law. The political formula was a mere interpretation of the forceful imposition of the biggest military arsenal, and consequently the interpretation of the military weight of the local armed militias and their capacity for outbreaks of violence, which translated into relative parts of the seats in the parliament and the government

16 days of activism pass on an Iraqi society which suffers from escalating violence,
Where the state maintains the constitutional right to deliberately kill a citizen under the so called death penalty, and practises it after sessions of torture,
Where honour-killing is still a constitutional right for any male or armed militia member who utters male-chauvinist idiocies against a woman’s honour,
Where the constitution supports social inequalities such as the marriage of one man to four women or more,
Where the constitution support economical inequalities such as a male’s right to inherit twice as much as a female, in the country of two million widowed mothers with no source of income,
And finally, where the laws allowed the multi-national companies to dig and extract and share Iraqi oil, while tens of thousands of Iraqi girls and women are sold daily to Sheikhs of oil, and wealth and to officers of armies.

The state let go of the women’s-human rights as there was no militia or group of violence which demanded women’s equality with men, whilst in the same time the state is keen to amend the laws which preserved the immediate political rights of those who can start outbreaks of violence or lead military groups which are mostly religious and sectarian

The US occupation of Iraq made force and violence as the basis for political representation.

In the 16 days of activism, OWFI raises the following demands

–    Abolition of death penalty
–    Full criminalization of honour-killing
–    Abolition of polygamy and all the practices permitted under the notorious article of the constitution 41.
–    Repeal of unequal inheritance law

OWFI is part of a local and international feminist and freedom-loving struggle which is escalated against gender violence, especially in areas under military occupation and attack

Permanent link to this article: https://www.owfi.info/article/16-days-of-activism-against-gender-violence-organization-of-womens-freedom-in-iraq/