The Organisation of Women’s Freedom in Iraq participated in the women’s march to Reclaim The Night in central London. 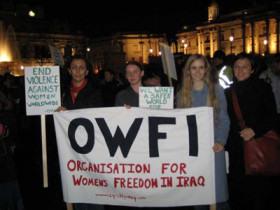 On Saturday the 25th November 2006 more than one thousand women took to the streets of London to mark the International Day to End Violence Against Women, and march for their right to walk in the streets at night without fear of rape and sexual harassment.

OWFI’s banner and placards were made by OWFI activists Fredrique Lauret and Madryn Parker-Munn, and some of the placards were distributed among the other marchers. The placards expressed some of OWFI’s core beliefs, such as the belief in universal women’s rights and the need to end violence against women worldwide.

The march started in Trafalgar Square before making its way along Charing Cross Road, Tottenham Court Road and Gower Street to the University of London Union (ULU), where a rally was held to speak out about violence against women. Some of the slogans chanted in the march were “2, 4, 6, 8, No More Patriarchal State!” “Not the Church, Not the State, Women Must Decide Our Fate!”, and “What Do We Want? No More Rape! When Do We Want it? Now!”.

OWFI activists took an active part in the march itself, and later displayed pamphlets and articles about women’s situation in Iraq on a stall in ULU. The stall attracted the attention of both individual women’s rights activists and organisations, many of whom stayed to chat and to learn more about OWFI’s work.

It was a very successful and positive evening for everyone in OWFI UK!

Permanent link to this article: https://www.owfi.info/activities/the-organisation-of-womens-freedom-in-iraq-participated-in-the-womens-march-to-reclaim-the-night-in-central-london/