International Campaign Warns: No Women, No Peace in Iraq 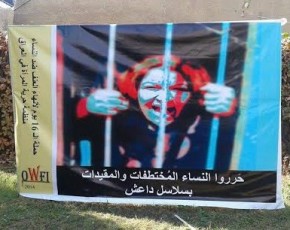 On June 10, the occupation of the city of Mosul started a new chapter of women’s suffering in Iraq. Daesh (ISIS) reawakened the ancient tribal habits of claiming women as spoils of war. While most of the detained thousands of women were from religious minorities such as Yezidies, there were also hundreds of Turkmen Shia, Shebek and Christians.

The international campaign against Daesh negotiates further militarization of the war lords in Iraq, and blind-bombing of Iraqi cities, and the local Iraqi and Kurdish governments applaud and receive. None of them are concerned with the enslavement of more than five thousand woman who are being bought and sold in broad day-light in Mosul, Raqqa and other “Islamic State” cities.

Around a hundred women were liberated by money paid to Daesh fighters by volunteering individuals, to go to their homes and find out that their patriarchal tribes no longer desired to see them. The Iraqi government officials do not find the fate of thousands of tormented women as a priority, and do not address the urgency of protecting and caring for them to the public at large. They continue to stick to their patriarchal positions which view women as private property which is of no more use to the men of the tribe once they were “used” by others. The Iraqi government officials have not yet stepped into an era of regarding women as citizens whose protection is the responsibility of the state, and do not see the need to address the mass sexual torture of their female citizens.

Neither does the international community which seems to be ruled by patriarchs who choose to stand by the Iraqi government’s side by providing further military arms and bombing only, as if further militarization ever brought peace to Iraq.

We in the Organization of Women’s Freedom in Iraq have taken a strong position against trafficking of women for many years, but are finding ourselves living the days of watching our sisters endure sexual slavery with no solution at hand other than those followed by individuals who bought the women out of slavery.

The day when negotiation with the human beasts towards liberating thousands of women from sexual slavery has come, and we cannot wait many years for Daesh’s destruction while our sisters endure sexual torture. OWFI begins to find ways to liberate women from detainment in all possible means, and plans to open a shelter for those who are rejected by their tribes.

Eleven years of cartoonish state-building in Iraq left the women unprotected, humiliated, and on their own. OWFI will continue to create the model of protection, empowerment, and nurturing of the victims of wars on Iraq, whether the state allows it or not.

With the help of the freedom-lovers around the world, we continue to survive the ongoing attacks on our society, and we will strive to be the model of a humane and egalitarian future.

Shame on all those who empowered a state which gave way to Daesh and never-ending sectarian massacres.

Permanent link to this article: http://www.owfi.info/campaigns/owfi-statement-for-the-14-day-to-end-vaw/