Houzan Mahmoud: Political parties need to draw women into their ranks to make themselves “credible”. 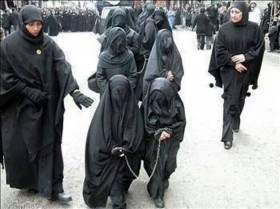 The Islamic State of Iraq and Levantine (ISIS) atrocities, since the occupation of Mosul city, have shocked the Iraqi and the International community altogether. Their criminal conduct is abysmal against Iraqi women in general, and specifically against the Yazidi, Christian, Shiite Shebek and Turkomen women.

The women are kidnapped and sold in groups and as individuals, to become temporary wives for ISIS warriors where they are forcibly held as sex slaves under the name of “Sexual Jihad.” Those atrocities have escalated throughout the month of August in line with committing genocide against the minority communities. As the massacres committed against the Yazidi, Shiite, and Christian communities were followed by the taking of hundreds of women to the newly set-up “concubine market” in Mosul, to the cinema building in Telafar, all the way to the Syrian depth of Islamic state, for the purpose of selling those women as sexual slaves.
Moreover the “purchase” of sexual slaves is made easy and “affordable” for the foreign ISIS warriors who came from distant countries, while the prices are higher for local war lords, tribal heads.
Some women however, are being used as human shields in order to protect the ISIS facilities from airstrikes, such as in the case of Telafar. The ISIS organization has caused Iraqis unprecedented catastrophic conditions throughout the captivity of women similar to the Islamic conquests that took place thousands of years ago; thus creating pain and devastation beyond any modern expectation, uprooting some of the most ancient communities who never witnessed this extent of horror, massacre, and insult to their dignity, denying them any possibility of a secure life in the near future. ISIS do not hesitate to commit any horrendous crime even towards children such as the beheadings or selling their human organs; as they take advantage of selling women and trafficking in children’s organs for the purpose of financing their state.

OWFI hereby reaches out to every woman detained or exploited by the criminal organization of ISIS in Mosul, Telafar, Sinjar, as well as the Western cities of Iraq. We in the OWFI stand with you and strive to provide logistic and financial support to you in order that you escape your concentration camps controlled by ISIS. We will send individuals who can help you to arrive at our safe home in Baghdad where we provide you with all the care and safety you need.

To all women chained and detained by ISIS slave-drivers, to all women who are forced to hide in their homes, to girls who aspire to live the in freedom dignity, and to all Yazidi women and Turkomen Telafar women, contact us at these numbers listed above and we will find a way to deliver financial and logistic support to get you to our houses safely. We beg you not to end your life or undervalue it in any way, or surrender to despair as a result of heavy torture or humiliation under the hands of ISIS criminals. Tomorrow brings hope with, and after every storm comes sunshine.

Long live Yazidi, Christian, Talafer, and Amerli women, in freedom and dignity Down with the ISIS monsters

Organization of Women’s Freedom in Iraq

Permanent link to this article: http://www.owfi.info/activities/call-for-iraqi-women-victimized-by-isis/