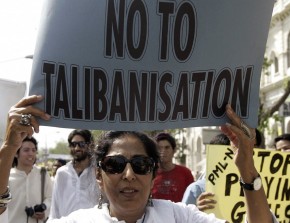 As the UN Security Council tackles the entity claiming to be “Islamic State,” and President Barack Obama invokes global Muslim responsibility, many ask whether people of Muslim heritage do enough to counter extremism.

The fact is, away from the media spotlight, thousands wage daily battles in their own countries against what President Obama called a “network of death.”

Unfortunately, jihadists make headlines while those who wage the anti-jihad rarely do. After all, everyone has heard of Osama bin Laden, but few know of those standing up to would-be bin Ladens across the globe.

There is a long, untold history of brave individuals of Muslim heritage who have challenged extremists.

In the 1990s, the women’s group known as the Algerian Rally of Democratic Women or RAFD (Refuse) dared to do just that during a “dark decade” of jihadist atrocities committed by the Armed Islamic Group battling the Algerian state. That violence claimed as many as 200,000 lives.

The demonstrations organized by the women of RAFD drew thousands of protesters, despite the danger. In October 1993, as the violence began to accelerate, they wore symbolic cloth targets in front of the President’s office to decry the threats to women and secularists. The entire roster of RAFD’s leaders ended up on a fundamentalist death list, but still they would not be cowed.

The day after a deadly 1995 bombing on a crowded street in Algiers, RAFD protested at the bomb crater itself. The police told them it was too dangerous, but activists gathered anyway and filled the crater with flowers.

Then, in 1995, the women’s organization held a mock trial of the Islamic Salvation Front’s leaders in Algiers. Some 900 attended despite posted threats to kill anyone who did.

Even worse, it sometimes elicited criticism from the Western intelligentsia and press suggesting that its members were inauthentic and Westernized.

Why were they labeled this way? One reason is that the Western media often frames the conflict as one between Muslim extremists and the West, rather than as a fight for human rights within Muslim majority societies. In this narrative, opposition to extremism is deemed Western. This is entirely mistaken.

When the West frames the conflict in this way, it can come across as a “clash of civilizations.” But this is not the case. There is a clash of ideologies—not civilizations—and it is taking place within each and every country affected by extremism.

The public relations battle of the ‘anti-jihadists’ is a critical part of the struggle against groups like ISIS—just as important as the military campaign. That is why the international community must do a better job to support those who are today’s version of RAFD, and to recognize that they represent a legitimate voice from within their societies.

Inside the danger zone, the Organization of Women’s Freedom in Iraq (OWFI) publicly denounces ISIS for its genocidal campaign against minorities, for raping women, imposing strict female dress codes and operating a “concubine market” that reportedly sells women and girls into sexual slavery. OWFI runs emergency phone lines and even a safe house for women fleeing ISIS persecution.

The Iraqi architect Yanar Mohammed, an opponent of the U.S. invasion of Iraq, founded the group in 2003 after the fall of Saddam Hussein.  Her goal was to promote women’s rights by advocating a secular, non-sectarian Iraq.  Like the women of RAFD before them, OWFI faced threats– in this case from both Sunni and Shiite extremists.  The founder once received an email with the subject heading, “Killing Yanar.”

Despite her bravery, Yanar once told me that she had limited access to Western media. This echoes what RAFD spokeswoman Zazi Sadou recently told me about the international response to their efforts: “No one wanted to hear us.” Even today, the West is still not listening to the voices of Iraqis who are standing up to the extremists. This must change.

If the international community wants more individuals to fight back, it must offer them support. While Qatari coffers have nourished jihadists across the region, secular groups who fight Islamists scrounge for funds.

If all this is not addressed then there is a real risk that Muslim fundamentalists–armed with money, weapons, foreign fighters and emotive religious rhetoric– will win both propaganda and military battles.

Permanent link to this article: https://www.owfi.info/EN/article/we-all-know-about-jihadists-but-what-about-those-waging-an-anti-jihad/