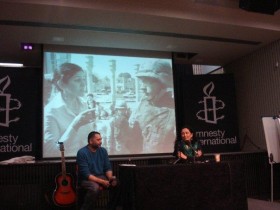 During the overthrow tens of thousands of communists, along with much of Iraq’s democratic-minded educated elite, were dragged out of their homes and shot in the streets. Their “crime” had been to support a leader who was on good terms with the Soviet Union.

But while Mahmoud cannot recall this bloody episode first hand she remembers well the oppressive years under Saddam Hussein, who was installed a few years after the coup and was supported by the West – until he too showed signs of defection.

The bloody removal of Kassem was almost a carbon copy of the joint CIA/MI6 coup in neighbouring Iran 10 years earlier against democratic leader Mohammed Mossadeq, who also tried to nationalise his country’s oil.

“The West, which has been instrumental in defeating progressive forces in the region for generations, now dare to label us backwards. How dare they portray our women as burqa-wearing, submissive victims and our men as a bunch of bearded, misogynist terrorists?” says Mahmoud.

“They have installed a corrupt regime in my homeland, supporting its reactionary laws in the name of respect for Iraq’s traditional values.

“In the same manner they called Saddam’s savage execution Iraqi justice, but we know they instigated the lynching to stop him from incriminating them in an open court.”

No-one knows for certain how many Iraqi women and children have been sold into sex slavery since the US-led Operation Iraqi Freedom in 2003.

The group that Mahmoud works for, the Baghdad-based Organisation for Women’s Freedom in Iraq (OWFI), puts the figure in the tens of thousands.

“Crimes that were virtually unheard of before have now become commonplace. So-called honour killings have shot through the roof and mass unemployment has pushed many women, especially war widows, into prostitution,” she says.

“Women have all but disappeared from public life for fear of being raped, killed, kidnapped or trafficked to foreign countries.”

Once Iraqi women’s legal rights and freedoms were the envy of their oppressed sisters in much of the Middle East. No more.

Thanks to the benign humanitarian intervention of two Christian extremists, they too face the prospect of an autocratic regime that sanctions misogyny in the name of religion.

And Iraq’s draft constitution has paved the way for oppressive sharia law.

“But the left is fighting back and will rise from the ashes, as we have done in the past,” says Mahmoud, who visits Iraq regularly and is active in her country’s rejuvenated women’s rights and union organisations.

Unionised oil workers in the south have been a constant thorn in the side of US and Britain’s plans to control Iraq’s rich resources. And since its foundation in June 2003 OWFI has organised thousands-strong demonstrations, seminars and campaigns against the occupation and for a secular, democratic Iraq.

The group also provides shelter and support for victims of domestic violence and women fleeing pimps and traffickers, though a lack of resources is a major obstacle.

“We brought 2,000 women out on the streets of Baghdad on International Women’s Day in 2004 at the height of the war, when women hardly dared go out,” Mahmoud recalls proudly.

“Since then we have had many successful campaigns, including breaking the silence around prostitution and forcing a debate on trafficking which has now led to a draft legislation to clamp down on it.”

Mahmoud emphasises that OWFI “is the opposite of many of the sectarian organisations that we have to contend with. We have secular women working side by side their veiled sisters. And many men support our campaign because they grew up in a society that was not so brutalised in terms of gender relations.”

The organisation’s wide appeal and its uncompromising stance have made it unpopular with the US-backed government, which is refusing to grant it NGO status.

“They have their own NGO stooges who have no grass-roots base and operate from plush offices, with huge salaries and private security,” Mahmoud says.

Back in Britain, she is forging links with progressive groups to raise awareness about the impact of the wars in the Middle East on working-class communities in this country and to challenge the West’s sinister portrayal of Iraqi and Afghan people as savages who need rescuing from themselves.

“Blowback” – the violent consequences of the war on terror – has expressed itself in disturbing ways.

Army recruiters target teenagers in deprived areas ravaged by mass unemployment. Brutalised by war and abandoned by the state that sent them there, increasing numbers of returning soldiers on both sides of the Atlantic are bringing the violence back to their own homes and communities in the form of drug misuse, domestic abuse and homicide.

“In times of war, violence, especially against women, increases as a result of a more militarised and macho society,” Mahmoud observes.

“Because minority communities continue to be treated as the enemy within … they are ever more vulnerable to racist attacks.

“Is it any surprise that some turn back to the musty comforts of reactionary and patriarchal tradition, when they are far away from the familiarity of ‘home,’ experiencing hostility and racism in their ‘civilised’ new home?

“This, in part, manifests itself in increased violence against women – honour killing, forced marriage.”

But Mahmoud fears there is an unhealthy focus on cases of domestic abuse and so-called honour killing in ethnic minority communities which serves to drive a wedge between them and the rest of society.

“There is an element of media bias and it goes back to the same racist attitude which seeks to portray these communities as savage, non-integrating aliens,” she argues.

Mahmoud is also concerned that the focus on grimly exotic, headline-grabbing “honour killings” serves to distract attention from the shocking levels of violence against women in wider society.

“The fact that in Britain two women a week are killed by a current or former partner is a form of honour killing,” Mahmoud points out, adding: “Women are constantly told they are ugly and fat and encouraged to have cosmetic surgery and to go on a diet – that too is violence against women.

“The difference is that, while in the Middle East the violence is often backed or sanctioned by law, here it’s sold to us as pop culture, fashion or even girl power.”

For Mahmoud, what unites us is the fact that we “all live in a class-based capitalist system,” a system that she believes we can only overcome “by fighting for our common class interest – for socialism.”

Permanent link to this article: http://www.owfi.info/article/brutalised-for-western-profit/