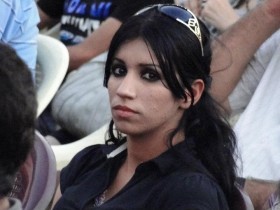 Although the numbers of demonstrators became much less in the Iraqi Tahrir square, Aya Al Lamie insisted to join the demonstrators every Friday of the last months. She insisted to put a woman’s face on the Tahrir demonstrations and cooperated with all the organized groups in the square.

On Friday 30-9-2011 afternoon, towards the end of the demonstration, a group of security men dressed in civilian clothing surrounded her, carried and threw her into the trunk of a car which they parked next to the square, in what looked like sectarian mob kidnappings, under the eyes of the police and the army- which had become common practice in the last months in Tahrir.

20 year old Aya was taken to a security facility in Jadiriyah-Baghdad where she was beaten by a mob of torturers using sticks and whipping her back and arms by cables.

She was released at 5:00 pm after being told:” This was a first warning!”

The thugs of Maliki prove again that they are the enemies of women. They persist in establishing a despotic rule in Iraq with the blessings of the forces of occupation.

If not for the occupation, people of Iraq would have ousted Sadam through the struggles of Tahrir square. Nevertheless, the US troops empower and protect the new Sadamists of the so called democracy who repress dissent with detainments and torture.

The US government and CNN bless the uprisings of Libya and Syria, while ignoring Iraqi struggles, as they had told the whole world that we prosper in their democracy. Scenes of 100,000 Iraqi rebels on February 25 still echo in our minds. Youth such as Aya led those demonstrations, and may still bring about a final uprising and ousting of a corrupt and oppressive government and a never-ending occupation.

Permanent link to this article: http://www.owfi.info/article/20-year-old-owfi-activist-aya-al-lamie-kidnapped-from-tahrir-square-and-tortured/