Women are the greatest victims of the rise of Islamic fundamentalism, and the extent of the violence being inflicted upon them can no longer be ignored, an international panel of human rights campaigners has said.

In a debate about jihadis, campaigners at the World Woman Festival in Oslo said that in countries such as Iraq, Syria, Afghanistan, Iran and Pakistan, women’s rights were increasingly being threatened by fundamentalists who wanted to return to the Middle Ages.

Attendees heard criticism of Western democracies for ignoring the plight of women in countries menaced by fundamentalism. Fawzia Koofi, an Afghan politician and author of the best-selling My Favourite Daughter, said that in the 1970s jihadi groups were handed blank cheques to help to end the war with the Soviet Union, but “there was no benchmark set on women’s rights”.

The Pakistani lawyer Hina Jilani said that at the time communism was seen as the biggest threat, but “fundamentalism could become a much bigger evil for all of us”. She added: “Ending religious fundamentalism with more religion is dangerous work. These policies do not work.”

Ms Jilani said similar warnings were ignored before the World Trade Center attacks in 2001. “We are the voices of the women who said, much before 9/11, much before the world felt the effects of jihad, ‘Don’t go down that road, it is dangerous’, but we were silenced.” 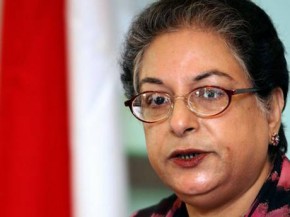 Yanar Mohammed, the president of the Organisation of Women’s Freedom in Iraq (OWFI), which runs secret shelters in Baghdad for women fleeing abuse, said Iraqi women were suffering because of policies put in place by the US and Britain which had allowed the rise of Isis. “Thousands of Yazidi woman have been sold into enslavement,” she said. “They are sold on 15 times as the men are told not to keep them a long time. But nobody is doing anything about this.”

The festival’s organiser was Deeyah Khan, who made the Emmy-winning documentary Banaz: A Love Story, about a British woman murdered by her family in an “honour killing”. She said: “We give so much space to the villains, such as IS, yet the heroes get so little space. We are here to stand in solidarity with the heroes.”

Norwegian-born Ms Khan, who had to quit her career as a pop star and flee to Britain and later to the US because of harassment by Islamists, said: “The Charlie Hebdo attacks could not be seen in isolation but were part of the Islamist terrorist campaign to silence any critique of the religious right.”

The Egyptian-American writer Mona Eltahawy, who was assaulted by Egyptian security forces while covering the Arab Spring demonstrations in 2011, warned that there was an epidemic of sexual violence in Egypt and that “there could be no revolution without a sexual revolution”.

Gro Harlem Brundtland, Norway’s first woman prime minister in 1981, told the conference it was difficult to balance being a “woman and a changemaker and to deal with your country as a whole” but this was what she had set out to do. In contrast, she said Margaret Thatcher had felt it was enough just “to be a woman and become Prime Minister”.

Permanent link to this article: http://www.owfi.info/EN/article/world-woman-festival-2015-women-in-countries-such-as-iraq-syria-and-afghanistan-worst-hit-by-fundamentalism/